In related news, one of our sites has won an award! FreeBibleimages is a Christian website sharing specially commissioned photographs depicting stories from the Bible, and also licensing some illustrated stories. Goznet Systems, the creators of Kourou, were approached to implement the website after the success of the Farnham Foodbank site. Anyway, FreeBibleimages walked away the winner in the People's Choice category at the 2012 Christian New Media Awards and Conference, and received this fine lump of Perspex to show for it - the icing on the cake after the buzz generated by the nomination alone! 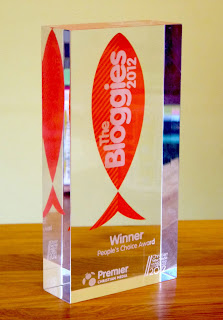 In accepting the award, FreeBibleimages' Paul Thompson dedicated it to the late Tony Staite, one of the founder members, without whose vision and financial generosity the project might never have got off the ground.
Posted by David Gosnell at 14:57